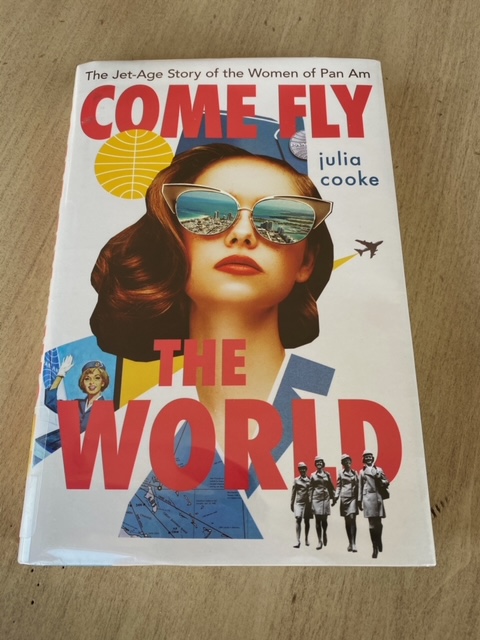 I’ve mentioned my love of reading on here before. And my love of the Kennedy-Camelot era, too. So when I saw that the book Come Fly the World: The Jet-Age Story of the Women of Pan Am was coming out, I put in a request at my local library ASAP.

The stories former Pan Am stewardesses have to tell are fascinating. Back in the late 50s and 60s, being a stewardess was one of the most glamorous jobs available to women. To fly with Pan Am, women had to have a college education and speak two languages.

They also had to be under 26 at the time of hire, stand between 5’3″ and 5’9″, and weigh between 105 and 140 pounds. All beauty standards set by men. And they had to be single, to make them appear ‘available’ (wink, wink) to their mostly male passengers. But they got to see the world.

Being a stewardess was one of the first jobs that gave women independence and let them play an active role in world events. The most moving episodes in Come Fly the World describe Pan Am’s role in the Vietnam War, flying soldiers to and from R&R in Hawai’i and Tan Son Nhut air base before and after their deployment. And in April 1975, the airline evacuated 2, 000 children and infants during the fall of Saigon, a mission called Operation Babylift.

As the women’s movement gathered speed in the 60s and 70s, stewardesses joined unions to bargain for fair pay and labor practices. In June 1968, they won the right to continue to fly after they got married, and/or after they turned 32. Or at least take the airline to court if they felt they were being discriminated against for their marital status or age.

In 1991, Pan Am went the way of the dinosaur. It sold its InterContinental Hotel Group, although InterContinental Hotels and Resorts still exists. The airline also sold the iconic Pan Am Building in New York, the last New York skyscraper with legal rights to display it’s name in huge letters. It is now the Met Life Building.

I wanted to read Come Fly the World because about 10 years ago, ABC made a TV series about a Pan Am flight crew called, well, Pan Am. It was a period piece set in the latter half of 1963. Some episodes were better than others, but I loved the show. The women’s outfits and makeup were amazing.

Pan Am was canceled after 14 episodes, which is too bad. It had the potential to tell interesting stories, at least for a few seasons. You can stream it on Amazon Prime here. And FYI, one of the stewardesses was played by a then-unknown Margot Robbie.

Tell me. What kinds of books do you like to read? If you’ve read anything interesting lately, let me know. I love me a good book recommendation! Let’s go all book group in the comments!