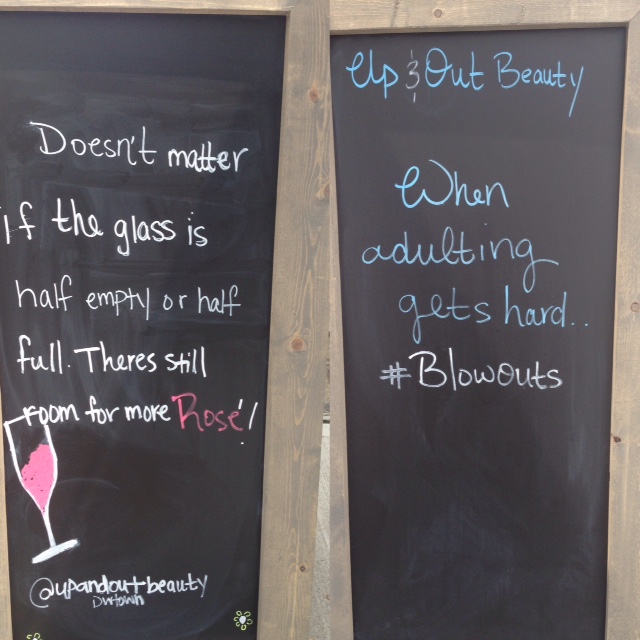 These signs at my local blowout bar are too funny!

Charlotte Tilbury’s latest launch, what you should know about natural beauty, botanicals and SPF, the cost of an ethical manicure, and National Lipstick Day (woot! woot!) in this week’s Fabulous Links!

FYI, Charlotte Tilbury is launching her first fragrance in mid-August. It’s called Scent of a Dream, and fan and client Kate Moss is the face of it. (Allure and WWD)

I went to this panel discussion on natural beauty, and found it very informative, re: how to read product labels and what to look for. (Well + Good)

Do the oils and seeds of certain fruits and veggies provide natural SPF? Short answer: no. (The Cut)

Why you pay more for an ethical mani/pedi. Because it’s true what they say: you get what you pay for. (Racked NY)

Friday was National Lipstick Day. (Of course you knew that!) Here are the top sellers from major beauty brands, and the 48 best cult and classic lipsticks ever. (The Zoe Report and The Cut) Here are a few of my faves:

Plus, this week on the blog, I reviewed Supergoop! and TULA Probiotic Skincare. 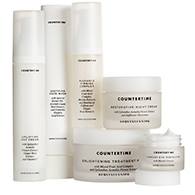 Back in December, a nice lady named Melissa e-mailed me. She is a rep for a natural skin care and makeup brand called Beautycounter. She offered to let me try some products from the brand’s Countertime collection.  Of course I took her up on it. You know me and products.

She sent me the Soothing Face Wash, Radiance Firming Complex, Uplifting Day Cream, Restorative Night Cream, and the Vibrant Eye Protector. My skin looked great! It was skin soft and smooth, and the appearance of my pores was minimal.

I’m a little on the fence about the scent, though. Since the products are formulated using all natural ingredients, they have a heady floral scent. Kind of old-ladyish, like your Aunt Truvy.

Melissa also threw in a Lustro Face Oil 2, which contains jasmine oil. This oil is supposed to boost the appearance of elasticity, so it is good for dry and mature skin. It moisturized my skin without feeling too heavy, which can be the problem with face oils. My skin is not particularly dry, so an oil can leave it feeling too greasy. This one was just moisturizing enough.

However, it also has a distinctive floral scent. But maybe that’s just me. I’m very sensitive to smells, and tend to go for earthier, nutty fragrances. Or maybe you just like the way your Aunt Truvy smells. The Beautycounter packaging is gorgeous, though. It reminds me of the packaging used by prestige brands.

For the uninitiated, Beautycounter was founded by Gregg Renfrew in 2013. The company is dedicated to developing and making available to everyone safe, natural skin care and cosmetics. “Our timing is right. The message has resonated with people. People understand how committed we are to safety and education,” Renfrew told WWD last year. “We are an information-first, product-second company.”

The brand launched Countertime last March. Just don’t call it “anti-aging.” The company’s mission is to empower and support women, so the term has been banned from Beautycounter’s Santa Monica, CA offices. Makeup artist Christy Coleman, head of creative design at Beautycounter, told WWD, “We are focused on aging graciously and in a positive way. Women can look amazing for a long period of time, and we are about preserving what’s there for a long time. We are all going to grow old, but we should feel good about it.” Amen, sister.

Instead of the usual anti-aging ingredients such as hydroquinone and retinyl palmitate, Countertime relies on extracts from the Spilanthes acmella flower, marine algae, lentil seed, Arctium lappa root, and Boerhavia diffusa root to fend off Father Time.

Countertime products will set you back between $40 and $75 a pop, and are available exclusively through the company’s web site and local sales representatives. Beautycounter has also consciously coupled with Gwyneth Paltrow’s Goop, and occasionally does pop-up shops.

Are you concerned about the ingredients in your skin care routine? Think you’ll check out Beautycounter?