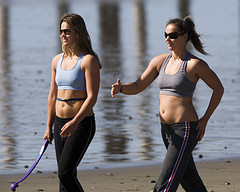 Scientists recently found that exercise may be one key to younger-looking skin. I am always searching for the Fountain of Youth, so when I came across this article in the New York Times, I decided it was worth a post.

Mark Tarnopolsky and his team at McMaster University in Canada took skin samples from the buttocks of volunteers aged 20 to 84. The researchers used skin from this area because they wanted skin with a minimal amount of sun exposure. When the team examined the skin samples under a microscope, they found, as expected, that older people had older-looking skin, and younger persons had younger-looking skin.

However, when the scientists subdivided the samples according to exercise habits, they found the skin of study volunteers over 40 who said they exercised regularly appeared closer in age to that of 20- to 30-year-olds, even if they were older than 65.

To determine if exercise had been responsible for the youthful skin of physically active volunteers, the researchers took a sedentary group of people older than 65, and put them on an exercise regimen for three months. When they compared skin samples taken after three months of regular exercise to samples taken at the start of the study, the scientists found that the volunteers’ skin had become younger looking.

Since I am a medicine and health journalist by day, I decided to contact the author and ask him about his team’s work. This effect on skin of only three months of endurance exercise (cycling), starting at 30 minutes and working up to 45 minutes twice a week, was surprising, Tarnopolsky said in an e-mail.

He went on to say that he and his colleagues have many studies planned to better understand the mechanism behind this finding, although he declined to comment further. They are also looking at the effect of exercise on the kidneys, eyes, and mouth and gums.

It is critical that those who exercise outdoors use a good sunscreen, Tarnopolsky advised, because the deleterious effects of UV exposure work against the beneficial effects of exercise.